Figure 1 (a) is a schematic of confocal magnetron sputtering equipment in which the magnetron’s central axis is aligned exactly with that of the substrate. Because a magnetron presents a cosine deposition profile to a substrate, for this setup the deposition rate is always higher in the centre of the substrate than at the edge — as shown in Figure 2 (a).

Due to radial symmetry, this effect is not diminished with substrate rotation (though planetary stages may help). Instead, it is necessary to increase the size of the target with respect to the size of the substrate in order to ‘flatten’ the deposition rate curve as seen by the substrate. This increases the cost of both the deposition equipment, and the consumable targets (a key consideration when using expensive materials such as precious metals).

An alternative solution is to move the target far from the substrate, which again effectively flattens the deposition rate profile across the substrate. Unfortunately, this leads to reduced deposition rates for the same applied power, and is also associated with significant levels of target wastage (i.e., coating of chamber interior walls).

The use of confocal magnetron sputtering in combination with substrate rotation is a solution to these problems. Figure 1 (b) shows the typical geometry associated with this approach. As shown, the central axis of the magnetron is not aligned with that of the substrate. Instead, the magnetron is offset laterally and inclined such that its axis intersects with a point between the substrate centre and the outer edge. As a result, the deposition rate profile seen across the substrate surface is flatter (for the same ratio of substrate to target sizes), assuming the substrate is being rotated.

A further benefit of confocal magnetron sputtering is that it allows for the positioning of multiple magnetrons for deposition onto a single substrate. This enables coating of substrates with multiple films of high uniformity. This is achieved by positioning magnetrons on the same radius with respect to the substrate centre, but at different points around the circle associated with this radius (Figure 3). Moorfield FlexiHead magnetrons are ideally suited for this requirement, allowing for adjustment of vertical position and head angle through the ranges required.

Despite these benefits, confocal magnetron sputtering is not appropriate in every situation. In some cases, very small ‘chip’ substrates are to be used, and fabrication of multi-layer coatings without breaking vacuum is required, e.g., for basic R&D purposes. In these instances, the confocal approach does not offer benefits in terms of uniformity or reductions in equipment cost (i.e., due to minimum magnetron sizes). However, it should be considered in any situation where coating of substrates with diameters >2” is expected.

At Moorfield, we are constantly developing the capabilities of our research tools. This month saw the first installation of a MiniLab tool equipped with
Read more 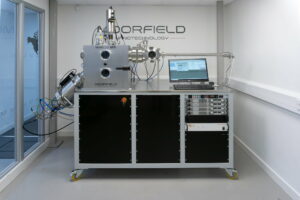 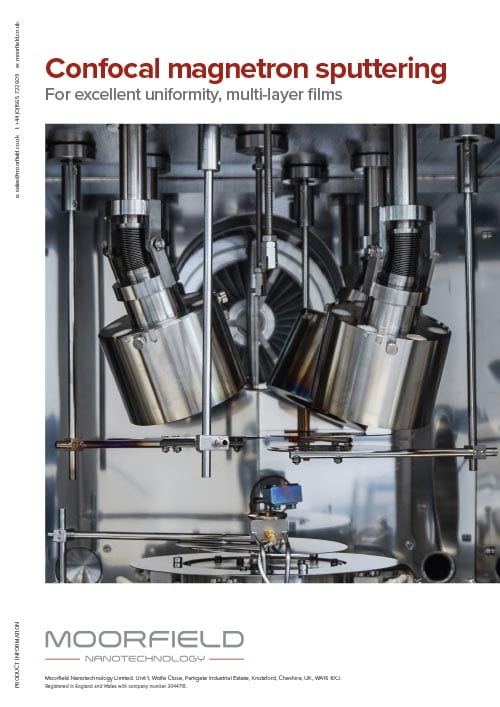 I UNDERSTAND
No thank you